The Song of Water

All our prints are High-Quality Art Giclee prints. These are created with museum grade archival canvas and inks.

All prints are coated with 3 layers of UV protective varnish and signed on the back by Roel.

They are shipped unstretched in a secured tube, to be stretched/framed by you (or a local frame-shop).

2 Years ago my dear friend Wim returned from a Vision Quest. Shortly after, he held a sweatlodge dedicated to water. As we sat in circle together, he shared this profound vision he received in his Quest. The Quest was during the very warm summer of 2017. After 3 days he had no strength left and was observing nature and praying. In the distance, 2 figures appeared with a magnificent diamond in their hands, radiating light to all directions. It was a vision that moved him deeply. As they came closer, it appeared to be the fascilitators of the Quest, bringing him water due to the harsh conditions.
When I heard his story, I was deeply moved. Water, source of life, had touched his soul so deeply. While he was singing in that ceremony, I was told to make him a painting of that vision.

This summer I worked on the painting and held it on the altar, as my dear friend was questing again. To fill it with my prayers for him, his beloved and all of life.

Yesterday I went to his sweatlodge, that was again dedicated to Water, 2 years after the one where he shared his vision. After the lodge, as I gave him the gift, we both cried, moved by the love of almost 25 years of friendship. Moved by the moment of sharing our awe for Water. Moved by the prayers.
When he saw the painting, he told me ‘this is exactly how it was’. The light in the sky, which I just had to paint, I don’t know why, was also how he saw it, connecting with the 2 figures.

This painting is called “The Song of Water”. Millions of years ago she travelled through space to reach this planet and now she gives life to us all.

With endless gratitude for water, in all its forms.

May we honor Water every day, and all of life. 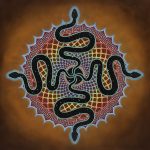 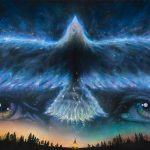 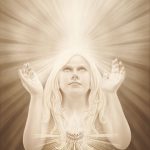 Heart of the Beloved