Spirits: Guides of the Shaman

Shamanism starts from the experience that everything is alive and has a soul. Not only the stones, the wind, and the trees are alive and animated. The shaman also has a living relationship with the forces of the dream world and the 3 shamanic worlds that he enters through the trance journey. These forces are usually called the “spirits.”

This living powerful soul dimension of existence is the field of the shaman. He listens with the ears of the heart to the dimensions of the soul and learns to work together with these unseen forces. 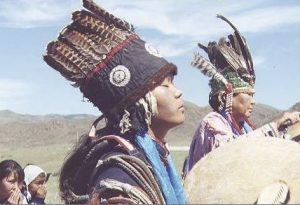 The core component of shamanism is this spiritual communication that makes it possible for the shaman to work together with the spiritual helpers to gain strength and bring healing. Making trance journeys, the shamanic healing and the rituals, they all start from the personal relationship of the shaman with the spirit world. It is this cooperation between people and the reality of the “helping spirits” that defines shamanism.

When the shamanic practitioner, through his work, begins to tune into shamanic reality, also called the Non-Ordinary Reality (NOR), he becomes increasingly aware of this living reality of the soul. The openness leads him to a personal and direct experience of this soul dimension in which he can experience that there are spiritual beings who guide him.

The helping spirits are essential in shamanic work. All traditions recognize spiritual forces that play a helping role and support people. We have the forces of nature that are honored worldwide, but also Christianity and the other major religions speak of angels and other unseen beings who communicate with people.

Power animals are non-physical entities that show themselves to the shaman or Western practitioner during animal trance. Certainly, in the trance journey to the underworld, power animals usually occupy a central place as a guide for the shamanic traveler, but they are also active in the middle and upper world. The relationship with a power animal is always one of support and guidance of the shaman.

The term spirit helpers originates from the English “helping spirits” and was mainly introduced by Daan Van Kampenhout in the Dutch language area. The term describes the beings that the shaman cooperates with and who do not express themselves in animal form. Often these spirits have a human form, but they may just as well present in other forms, natural beings, the wind, an angel or ancestors, and other people from history. The possibilities are endless. The essence is not so much in the outer form but in the relationship with the practitioner.

Spirit helpers often have a guiding function. The shamanic practitioner has a long-term relationship with some, but sometimes a spirit helper only comes once to offer guidance or support. They guide through the landscape of the 3 shamanic worlds and often also have the function of counselor or teacher.

For example, someone who works with shamanic healing will usually have healing teachers in the other worlds who support and guide him on the path of healing.